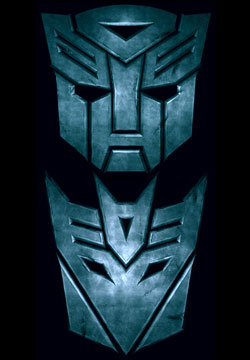 So I want to go see Transformers … Theo doesn’t because he says he doesn’t like going to the movies because all he does is fall asleep. Instead he prefers spending $5 for fuzzy bootleg versions of everything that he buys off his boy to watch at home, which either don’t want to play in the PS2 or i spend a good part of the movie watching people getting up to go use the bathroom.

Dude, I LOVE Marvel Comics movies and I hated it when he got Ghostrider; I got all into the movie despite its fuzziness and then just at the climax of the movie it kept skipping horribly and then … “Unable to read disk” DOH!

Sooooooo I mean like wtf? If he doesn’t come … then I am totally going by myself. I want to go see that shit. I liked Transformers as a kid and this would be so nostalgic. I had like 6 of the Autobots toys when I was little … of course Bumblebee was the first one I got because that was my favorite. I had the complete “metal” version; not that cheap plastic shit they try to dish out as “toys” to kids now. Wish I had kept mine but he broke in many more places than one since I played with him alot. I also had those “dogs” which came later in the comic. I always wanted Optimus Prime but him being their leader, and the largest, of the Autobots, he cost more so my Mom never bought him; just the small guys. Optimus Prime transformed into a 16-wheeler while Bumblebee transformed into a Volkswagen Beetle; so all you 80’s cartoon people out there, you can understand why OP cost more; but then again, you probably had one yourself. My favorite Transformer was Bumblebee; he was the yellow “Beetle” (did I mention that already?). Don’t know why I liked him but I did and I bet the car that the dude I read about in the previews gets is the Beetle. How can anyone resist a VM Bug as their first car? And me liking sports cars and technology … I’m really looking forward to Transformers having some amazing cars along with awesome CGI (computer graphic interface). Oh yea … got to have a fast car chase scene; it won’t be anything without one =P